Chauvet several new items which they released at Prolight + Sound (they, unfortunately, were unable to bring the fixture with them to NAB)—the new Chauvet MK3 profile and spot units.

The MK3 Profile has almost 4 times the amount of lumens as the MK2—51,000 source lumens to be exact. CT is 7,441K with a CRI of 91.2 with filter (CRI is 73 without). It has a large zoom range of 6 to 54 degrees. Similar to the MK2 it has an advanced shutter system however, with a 120-degree rotation. Color mixing includes CMY and CTO, along with a 6 color flag wheel. For gobos, there are 7 rotating glass and 9 static. Other features include an effects wheel, two frost flags, fast 9:1 iris, 3 facet and 5 facet prisms. The MK3 Spot is similar to the Profile with a couple of exceptions. They replace the framing shutters with a 3rd gobo wheel (rotating) and the Spot includes a 5 facet linear and 5 facet round prism wheel.

For highlights on-set or for the control/edit rooms, Chauvet Professional’s Ovation FTD-55WW is a track mounted, warm white LED (3-inch) “inkie” Fresnel-style fixture. This fixture projects a bright, beautifully soft field of light within a 30º – 69º field angle controlled by a manual zoom allowing you to add light where needed. A barn door for the fixture is included to help shape the light and direct the light.

With a color temperature range of 2700k to 5600k, this Variable-Color series of fixtures features an onboard RGB color mixing display with the optics you come to expect from a Mole Richardson lighting fixtures.  All fixtures come with Lumen Radio and Bluetooth wireless control capability.  The standby draw is <.2 Amps Max. 30V DC making a 30v DC, Block Battery the perfect accessory for location shooting.

The Variable-Color series is also available in panels, soft lights, and space lights.

Coming soon is the 10” 5k tungsten replacement and the 17” 10k replacement.

Be on the lookout for the Mole Bluetooth app also coming soon. 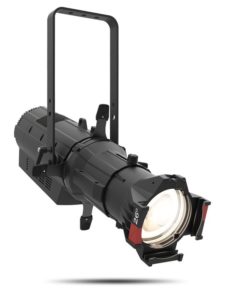 Chauvet’s latest showstopper remains the Ovation series, now in available in variable white—the Ovation E-930VW (ellipsoidal) and Ovation F-915VW (Fresnel). This proprietary LED engine works differently than one might expect. Chauvet uses a 6-color system to create exceptional color consistency in a flat and even field from 2800K to 8000K, as opposed to the more traditional method of mixing warm white and cool white LED’s. The independent color control also creates the ability to add a dash of color when desired. With the ability to change color temperature at 100K increments without losing intensity, it is all about consistency. Other functions include onboard manual control or DMX control, +/- green adjustment, 16-bit dimming, near silent operation, and adjustable Pulse Width Modulation to avoid on-camera flicker. As an added bonus, the Fresnel also features a motorized zoom. Overall, these fixtures provide simplicity and power at once, an ideal solution for studios and theaters alike. Most importantly, they are now shipping! 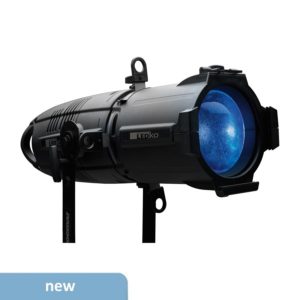 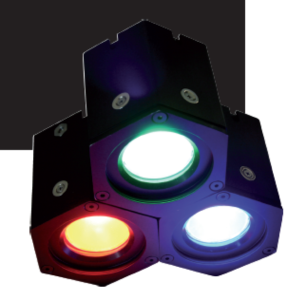 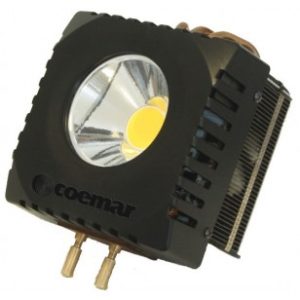 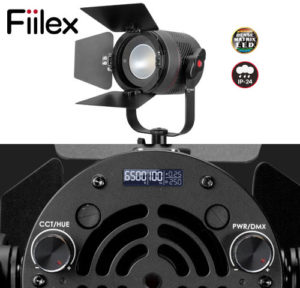 Fiilex released their new P360 Pro and P360 Pro Plus portable LED lights at the NAB show this year.

Fiilex has upgraded both fixtures, both include a swanky new OLED display to show precise CCT, hue (for Pro Plus), intensity, and DMX levels. They’ve  also made some physical improvements to include a longer yoke, accessory lock, and deeper spigot.

P360 Pro is the next-generation version of Fiilex’s flagship portable LED light. This 400W-equivalent fixture takes everything that made the original P360 great and brings it to the next level. The CCT range has been expanded (2800-6500K) and dimming now runs from 0-100%. The Pro maintains top-tier CRI (>93) at any setting.

Weighing under two pounds, the weather-resistant (IP-24) P360 Pro and Pro Plus are designed for travel, but it can also be easily integrated into DMX setups with its onboard DMX functionality.

Fiilex offers a wide array of accessories, ranging from magnetic fresnels and diffusers, to softboxes and larger fresnel attachments. With these light modifiers, the Pro Plus can be turned into a broad fill, a powerful spot, or anything in between.