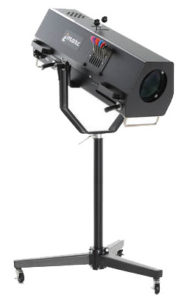 Strong had a range of offerings on display at LDI this year.  For smaller venues, they were showcasing the units from Phoebus (which became a wholly-owned subsidiary of Strong earlier this year).  While physically very similar, the iChip Mystere uses a 200W multi-LED light engine as a source and the iMarc200 utilizes a 5600K emMarc DC arc lamp.  Both offer six-color boomerangs, dowser, and iris.  Moving up to the iMarc850 the unit gets a self-cancelling boomerang and adds a clipper to the dowser and iris as well as significantly increased output.