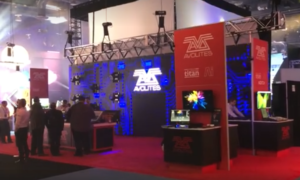 Avolites was highlighting their Titan V11 Software upgrade at LDI including the Titan v11 Remote App.

The Titan Remote works alongside your Avolites Titan lighting console to provide moving light control from your iPhone, iPod Touch or Android device.
To use the Titan Remote you must have an Avolites Titan console connected to your device via a WiFi network. Titan Remote V11 works with any Titan Console running Titan Version 11 to connect to consoles running older Titan versions use the corresponding Titan Remote app.

Any number of Titan remotes can be connected to a console and another lighting designer can work on the console while the remote is in use. The remote is easy to use as the screens look and feel like the full Avolites consoles with the same buttons and workflow as the console.

Avolites was also showing the power of the new  AI media server v10 that is packed with new features like: