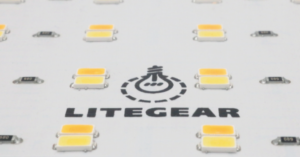 LiteGear showed the benefits of their new CineMitter series of applied phosphor LEDs. Exclusive to LiteGear, these new emitters set the standard for cinematic, color-correct LED lighting. Efficient, and full-spectrum, these LED chips offer state-of-the-art output with a 40% increase in brightness over VHO Pro. Another distinct feature of the CineMitter is the extended Kelvin range. LiteGear pushed the lower CCT to 2600 degrees Kelvin (K) allowing for candlelight or deep-tungsten output while increasing the CRI to a staggering 95+ — that’s nearly indistinguishable from traditional incandescent sources! On the cool side, the CCT was pushed up to 6000K to better balance for overcast sky or cool white fluorescents. This increase in CCT still achieves a CRI of 95+ and provides beautiful, full-spectrum daylight. CineMitter is now standard on LiteMat S2, LiteMat+ Plus, LiteTile — and coming soon to LiteRibbon.

Speaking of LiteMats, the new LiteMat+ Plus series of LED light fixtures is the ideal luminaire for set lighting and rental company inventories. LiteMat+ Plus incorporates everything you love about LiteMat, features the new CineMitter, and adds some distinctly new features. The most notable change is the PL7 locking connection system, which happens to be the same for every size of LiteMat+ Plus, and the new LiteDimmer+ Plus series of dimmers with built-in camera battery mounts. 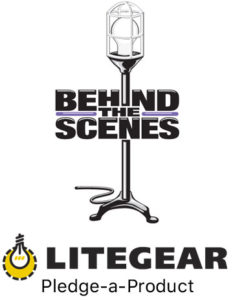 LiteGear also presented a check for $7750 representing a percentage of the profits from sales of their new flagship fixtures, LiteMat+ Plus, to support the Behind the Scenes Charity.

Upon presenting the check, LiteGear CEO, Al DeMayo, stated “We are very proud to be part of such a great charity. The support for entertainment industry members is an admirable cause that LiteGear can really get behind.”

Tobin Neis of the BTS Foundation Board of Directors commented, “Behind the Scenes is thrilled to have LiteGear as a part of our Pledge-a-Product program and for their first year they and their customers have made a wonderful contribution that will go far to help entertainment technicians in times of crisis.”