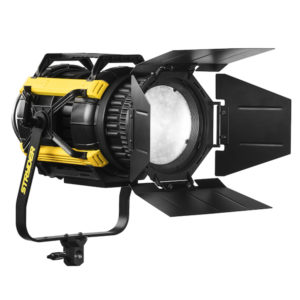 Ikan this year announced the release of several new product lines, bringing robust new options to their already extensive catalog of fixtures. Central to their booth was the impressively diverse Stryder Fresnel. Featuring 200w of LED power, the Stryder can be tuned from a warm 2700 Kelvin to an overcast 6500 Kelvin, and its rotating focus barrel can be brought from a wide flood to a narrow spot. For a brighter, punchier source, the front fresnel can be removed entirely, allowing for a wide, unobstructed beam. The Stryder features the option for either a gold mount or v-mount battery system and a large screen for easy read-out.