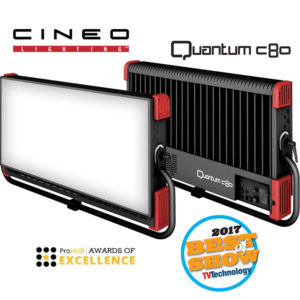 The Qc80 gives professionals the unique ability to independently control the dimming curve, white light, colored light, and saturation.  Stop worrying about color and light variance from one session to the next. The intuitive controls of Qc80 allow for predictable, repeatable results. Qc80’s phosphor-converted saturated color LEDs work with the phosphor recipes in the white LEDs to create a balanced, natural-looking spectrum.  Combining Cineo’s award-winning white-light quality with innovative saturated color technology, the Qc80delivers up to 50,000 lumens of beautiful, easily controllable, full-gamut light.

The Qc80 boasts a substantial 2’ x 4’ diffused illuminating surface, weighing less than 50 lbs., with a maximum power of 800 watts.

The strategy is simple: four controls or four DMX channels control the entire fixture in a single mode of operation:

White – For color-accurate white light, choose the CCT as you would with any Cineo fixture, using the WHITE rotary control or the rst DMX channel.

Color – To optionally add saturated color, the COLOR control adjusts the hue, the color of which is displayed on the control panel or managed on the third DMX channel.

With the Qc80, the same color shading can be achieved regardless of the CCT used for photography. For example, +2 Green added to 3200K CCTwill look the same as +2 Green at 5600K to the correctly white- balanced camera.

In addition to our proprietary phosphor-converted white light LEDs, we developed phosphor-converted saturated color LEDs. These work with the phosphor recipes in the white LEDs to create a balanced, natural-looking spectrum featuring Cineo’s deep-red color rendering technology. The saturated color LEDs use the exact same dies as the white LEDs, allowing all light-emitting elements of the Qc80 to carry identical thermal stability, and perform over time with identical differential aging. After years of service, we guarantee that our color stability remains consistent.